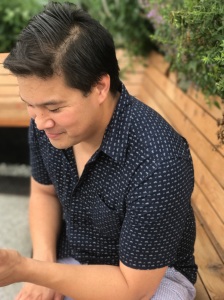 Albert Abonado is a 2014 NYFA Fellow in poetry, the Director of Adult Programs at Writers & Books and teaches creative writing at SUNY Geneseo. He is the author of This is Superbook (H_NGM_N Books). His work has appeared or is forthcoming in The Literary Review, Zone 3, Waxwing, LIT, Redivider, and others. In He is also the host of the poetry radio show Flour City Yawp on WAYO 104.3 FM-LP. He lives in Rochester with his wife and a hamster.

(The Literary Nest asked him to express his thoughts on his poetry. Here is what he wrote for us. I hope our readers appreciate his insights.)

The poetry landscape is always a dynamic one. One year, the formalists are in vogue. Another year, spiritualism dominates the conversation. Recently, poetry feels like it has made a notable shift away from irony and skepticism, has moved from an aesthetics suspicious of language and originality to one deeply sensitive about its power to conjure and define our identities, a movement that appears to be informed by the politics and vernacular of Black Lives Matter and Occupy Wall Street, which is a necessary maneuver as we struggle to deal with an administration in which language has little power. Everything is #fakenews. Everything is covfefe. Or rather, language has such great power that the administration and its institution put a tremendous effort in undermining its ability to influence, to move and rattle us.

To push against this, to resist and reclaim a language that has been weaponized against so many, we have seen a community of poets emerge with an aesthetic that disrupts those problematic power structures entrenched in our language, a poetics that intends to smash those very structures and create a space for the poetry in which the body is not an abstraction, does not require an apology, lives both on the page and beyond it. I think the tipping point can be found in moments when writers like Kenneth Goldsmith were held accountable for appropriating the autopsy report of Michael Brown, moments in which the narrative shifted away from a predominantly white patriarchal gaze to writers like Cathy Park Hong, who assert a poetics that does not diminish the relevance of history or biography in poetry.

My poetry comes from the ecstatic and the idiom, from finding the strange and the surreal in domestic routine. My Writing wants to radically escape from itself, which it fails to do every time. My Writing was raised a Filipino Catholic in the white suburbs of Long Island, confronts the conservative politics of the Marianist brothers that guided my high school education, is steeped in the optimism of my immigrant parents, in the language that negates the color of my skin or the shape of my eyes (I’ve been told you’re practically white is a compliment), skeptic who makes the sign of the cross before travelling across an icy road, played too much Starcraft in college, mourns the loss of AOL Instant Message Away Messages and checks my cell phone too often only to ignore texts, reconciles an affection for Jock Jams and Harold and Kumar with the love of myth and rosaries and prayer, believes that poetry is a spiritual practice, a reach for the ineffable, a way to speak to my grandparents. In this, my writing shares the democratic spirit of my peers, who embrace those glorious contradictions without apology, who see the urgency of their stories and can’t extract themselves from the politics of their writing, where even joy is a political act.

When I think about the things that motivate me to write, I often look to other writers to be reminded of the richness and textures of our language, discovering writing that makes me want to write, makes me want to grab my wife and read her a poem that I love. As a practice, I often like to read a few poems before I sit down to write, to put me into that headspace, a way to revitalize my senses. They can serve a greater purpose than exposition. I need reminders that our words are more than utilitarian. I look to writers like Frank O’Hara and John Ashbery, Li-Young Lee and Dana Levin, Terrance Hayes and Denise Duhamel. Kate Greenstreet and William Carlos Williams to remind me that our everyday speech is already strange and dense with inference. Recently, I fell in love with Tommy Pico’s Nature Poem. I could go on.

As poets, we have a responsibility to the language we use, accountable for the choices we make on the page. We may write largely in private, isolated in our practices, but can’t ignore that any publication or performance is a public act. The moment we reveal the work we have been developing, we become part of a larger historical conversation. While I write about poetry as craft and art, I can’t forget that there are institutions in place that reproduce some of the problematic power structures that exist. As a community of writers, we are responsible for finding ways to give marginalized voices greater access to allow them to be heard. We have seen how our institutions either assimilate these voices or ignore them. The onus is on those of us who have traditionally enjoyed greater access than others to support these writers, to give them a platform to be heard, listen to them.