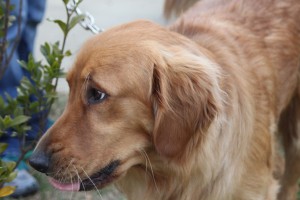 “I could have been an orator, you know. A politician, or a spokeswoman for something, like Nutri-Grain or a high powered photocopier that also scans and faxes. Or I could have been a businesswoman, conning people out of millions. I would make a good celebrity too. Definitely. I would do great press conferences, great acceptance speeches.”

Willy M’Gruff leans his head forward for more attention. I reach through the cracks in the fence, eyeing the house for signs of life. Finding none, I return his affection.

“My ideas are great, you know. I have great ideas. It’s just that I can’t convey them very well. At least not to people, any way.” I turn my attention to his ears, finding the cartilage and massaging it. “I don’t know, they just never understand me. No-one does.” He nudges at me for more. “Oh, I know! Self-pity! But still-”

I’ve got to keep an eye on the neighbours’ place too. They’ve almost busted me a hundred times. “What I’m trying to say, Willy, is that if they understood me – they’d be amazed.”

Every night I visit Willy. I find his affable ever-presence comforting. No matter what happens to me during the day, he will be there for me at night. Sometimes he’s sleeping, it’s true, and takes a bit of coaxing to draw him to the fence, but he always comes to me eventually. We’re split souls. He doesn’t belong behind that fence. And I don’t belong – well, anywhere. But least of all university.

I’m enrolled in Behavioural Science, which is just a fancy way of saying Psychology. Than in itself is a fancy way of saying Speculating Wildly About People Without Proof. It’s OK – I mean, I learn a lot, sometimes anyway, when I reflect on a topic after it’s done. Like I know a lot about sleep, for example (although not enough to treat my own wayward insomnia). But during semesters, I don’t really feel like I’m learning anything at all. It all just seems so obvious, so simple – as if I already know it. I guess a lot of it is common sense. Like not looking at a screen before you sleep, and going to bed and getting up at the same time every day.

I don’t have trouble getting up in the morning. If anything I explode out of bed. I’m a morning person – the problem is, I think I’m a night time person too. Like I can’t go to sleep until at least four, but then I have to get up at nine, and there’s kind of a limbo land in between in which I half-sleep. I don’t feel tired during the day, it’s just those long, boring nights. If it wasn’t for Willy, I’d be lost.

My housemate Jack says I’m neurotic for visiting someone else’s dog every night, but he works at the RSPCA so you think he’d care more. Besides, what does it matter that Willy ‘belongs’ to someone else? That’s just the law – they can’t own him, any more than they could own me or Jack or Barbara Streisand. If it was up to Willy, he’d come live with me, no hesitation. I know he would. Then I’d drop out of Uni and we’d start an online craft store together. We would visit op shops and buy old shirts, pick off the buttons, glue them onto silver rings and sell them on Etsy. We’d call them button rings. Willy would be in charge of social media promotion, and I would be in charge of mail distribution.

I’m thinking of dropping out of Uni for real now. It’s all becoming a bit much – everything’s due all at once, and besides, I don’t think I really like psychology anyway. It’s too theoretical, too abstract. They try to deal with reality, but really they just create their own realities, that they layer over society like Glad Wrap, and all they do is stifle, stifle, stifle. Besides, a lot of it is statistics, and who needs that?

I’ve been talking to Willy about it. He keeps pretty quiet, but Jack reckons I should ditch it and enrol in Arts instead. He reckons it’s heaps easy, and his relaxed lifestyle is pretty good evidence to that fact. I’ve never seen him studying, except one time in the week before exams I went into his room to ask what his plans for dinner were, and he was hunched over the desk in the dark, taking notes furiously by the lamplight. “Buzz off,” was all he said.

Every morning he goes for a run. He usually gets up before me – heck, sometimes I’m still awake when he gets up – but I reckon he’s a bit of a freak for exercising so much. He’s not even that fit, I guess because he doesn’t work out at a gym or anything, just runs every day – plus he’s heaps pale and he bleaches his hair, and always wears black, short-sleeve shirts. He’s got like 20 of them.

We normally have breakfast together. We’re both cereal buffs – I’ve got my Weeties, he’s got his Crunchy Nut, but we swap around a fair bit. Most of our pantry is filled with boxes of cereal, but then it’s a pretty small pantry. Our whole kitchen is only a few square metres it seems, and the table is pretty rickety. It rocks back and forth on two of its legs, but we can’t afford a new one.

I’ve dropped out of Uni and I’m working at the local library three days a week, which is just enough to pay the rent. They were kind enough to take me on for a trial, and I impressed them so much they kept me on. It’s really easy work. All I do is shelve books and help people use the computers.

I started visiting Willy during the day as well, during my lunch breaks. He’s always out – they never keep him inside or anything, and as far as I know they never even take him anywhere – I’ve just got to be more careful hiding from the neighbours during the day. They’re always in their front garden, weeding or watering or whatever it is gardeners do.

I’ve asked Jack if he can have a word with anyone at the RSPCA, but he said there’s nothing they can do, even though sometimes Willy is stuck outside when it’s really hot, and you can see he’s pretty distressed – I mean, he’s panting and he can barely get up to come over and see me, so what does that tell you? I tried to make a formal complaint online, but they want to know so much detail, like whether he has a water supply or what kind of dog he is. We can’t really tell – he kind of looks like a labrador, he’s that colour anyway, but at the same time he looks nothing like a labrador. He’s taller, gruffer and less domesticated – more like a friendly lion than anything.

He’s pretty old, too. He looks about ten, but he could be older – heck, he could be 20 – he’s got a kind of ageless grace about him. Jack says he might die soon, but I don’t believe it. I can’t even think about it. I don’t know what I’d do without Willy.

Willy’s not there anymore. I think they finally let him into the house and now he lives in there all the time. His bed’s not on the porch anymore, so they must have taken it inside. I’m happy for Willy, I know he’s more comfortable where he is now, and I’m glad he’s got air conditioning. But I’m sad I can’t see him anymore. I still walk over every night, just to check if he’s out, but he never is. I still can’t sleep, and I like to walk anyway, so it’s no trouble.

Today a customer asked me where we kept the reference books. I think she wanted to understand her husband better, because I saw when she checked them out she also had some books about marriages, with titles like Men Are From Mars, Women Are From Venus, and Marriage 101: Negotiating Compromises. I felt kind of sorry for her, she was so timid looking, but she was also resolute. I imagined her taking them home and reading them on the couch in her pyjamas, her glasses slipping down her nose, her husband not even noticing what she was reading, and not bothering to ask.

After she was gone I wandered over to the reference section and flicked through some of the psychology books. Personality Studies, Mapping the Human Psyche. It all seemed so trite, and inescapably sterile. It didn’t feel like life to me. Still, I would have liked there to have been a book to tell me what to do with myself now that Willy is gone and I’ve got no-one to talk to. I feel like I’ve got so much potential, like there’s so much that I could do if I could just focus my mind and find a way to do it – whatever ‘it’ might be. The thing is, I don’t really want anything that bad. Nothing appeals to me, not enough to do it anyway.

So much is holding me back. Willy understood that. He saw me underneath those things, who I could be rather than who I present as to the rest of the world. I miss him a lot. I remember all the good times we had together. Jack says dogs have pretty short memories, but I know that’s not true. I know that Willy’s in that house, comfy and cared for, probably missing me right now.

Mathew Drogemuller is a writer, journalist and Fleetwood Mac enthusiast based in Adelaide. His life-long ambition is to write a series of chess-themed novels and then eat top-notch maasdamer every day of his retirement. He has a degree in law from Flinders University and a staghound from the animal shelter. Currently chronically addicted to New Yorker podcasts, he has found time to write for VICE, Crikey, The Guardian, Eureka Street, Rip It Up, The Advertiser and Mixdown. His short stories have appeared or are forthcoming in Voice In Journal, SAWC’s Dubnium Literary Journal and The Literary Nest. Follow him @matdrogemuller.

This site uses Akismet to reduce spam. Learn how your comment data is processed.