In the Dirt Is a Shining Spot of Gold

Last time I saw him, I was eleven, and now he’s standing in the doorway, and he’s wearing a black suit, black pants, dark sunglasses, so he looks like he’s going to someone’s funeral, and he’s staring at the empty hole where the doorknob should be.

“You have no doorknob?” he says.

He’s my father, and on the first day of grade six, he went to get some milk for my mother’s decaf. Then she started showing up at work barefoot.

I wolf down a mouthful of General Tao chicken.

“This your house?” he says.

He grabs the doorknob lying on the bookshelf, and he plays with it, and he grins and, he winks at me, so I think, whatever.

I should paint that wall. Buy a new sofa. Get rid of the boxes.

He wanted to see me after all those years, he tells me, because his son is moving out, and it hit him that he’d never known me, and I didn’t know he had another son, so it’s not like I care, and he asks, “would you like to know what I do for a living?”

I start the fan. It blows hot air.

“Advertising,” he says, “the business is drying up.”

I can hear the leak of the faucet, and the fridge is buzzing, and I wish he would just leave, so he goes on and on, and he tells me how he made a killing, and somehow it’s not right to sell his business to the Americans and the Asians, so the window is open and we can hear the buzz of a DC-7.

I live close to the airport.

I write little one-line aphorisms in my spare time. Where is my soul? Sing what crap and smile. Life is bucket of White English Roses. Beats me what that last one means, but it sounds good, and I like it.

He asks me if he can sit down.

I’ve got a pain in my back from moving all those boxes, and he takes off his black Armani overcoat, and he drops his sunglasses on the table, so I see his eyes.

“Formica,” he says, tapping on the table. His fingernails are impeccable. Just the right length. Woman-like.
“My body,” he tells me. “It ached.” When he woke up in that cramped apartment one morning with me and my mother, he just walked away. Then he slept at the YMCA. He got a job at McDonald’s. He worked in a mailroom. His life had changed. His voice is low and authoritative, and I’m thinking, I wish I had a voice like that, and my coffee is getting cold, so I swallow.

His face is so tanned it could be made of leather.

I’m still trying to figure out what he’s here for, and I grab my airplane ticket, and I say, “so I’m leaving in an hour.”

He scratches his head, burying his hand in a bush of stringy, dark hair. He moves a little closer, and I can smell his garlic breath. He grabs my hand.

Leaning against the unpainted wall, I say, “there’s a black and white painting of a man falling down,” and he nods, and I give him a nail and a hammer, so then we’re both putting up that minimalist thing on the wall, and once it’s up, he gives me a great big hug as if we’ve really achieved something grand, and I can feel the smooth cheek against my face, so I can smell the Aqua Velva, and his neck is moist, and this hug lasts forever so my arms hang loose on the side, and the last thing I need is some estranged father getting emotional.

I’m not wearing any socks. I’m standing on the white carpet in the living room. There’s an old spaghetti sauce stain left there by the former owner and I think, when was the last time I ate spaghetti?

He’s said that already. OK, so he likes reminiscing about his pain. Am I supposed to like him for that? His eyes are protruding from their sockets. His lips are thin. I don’t look anything like him.

As if that explains anything. Maybe he should try some other cliché. His life had no meaning anymore. His soul was dying. His mother never loved him, so he needed a mother, and my mother was my mother, so he needed another mother to mother him until she became a mother herself. He lights up a cigarette. I see a dimple. He’s smiling.

At that point, I walk out to get some air, and he follows me, and we’re on the balcony, so in the distance we can see the Air Canada hangar, and the planes are parked on the runway, and I’m sweating, so there’s a wind blowing, but it’s like a furnace blast, and I can feel the trickle down my back, and he leans on the balustrade, so I see his profile.

“In advertising,” he tells me, “threaten to kill yourself If nothing works.”

He once did an ad campaign to sell some pork spread with onions and spices, he tells me. The client’s response to his great idea was “J’aime pas ça.” So he opened the window and stood on the ledge. I’m an artist, he told the client, let me work.

“I got it,” he says, “sold tons. French Canadians love pork spread.”

Mom never spoke English to me. I learned to speak with an accent. The French Canadian accent never disappeared, even if I slept on Thursday nights with a Romanian Berlitz instructor called Nina.

This man is full of clichés.

Then he tells me to never stop dreaming.

My next door neighbor, she’s on her balcony too. She’s watering her plants and trying to stare down her begonias. The water from the can is dripping down seventeen floors.

I go back in. He follows me.

He gets down on his knees. He’s in a funny position. He’s got one hand on the table; the other hand is resting on his left thigh. Head bent downwards. “Forgiveness,” he says, “I’m begging.”

Why didn’t he ask my mother for forgiveness? Oh, it’s too late. Right. Cancer. Ovarian.

You’d think he’s praying. I gulp down my coffee. I flick the lemon sliver away from the fork.

He doesn’t say a thing, not a moan, and the fork is sticking out of his left hand, and the blood is spreading out on the yellow Formica table, and his mouth is all curled up like a pumpkin cut at Halloween, and he splutters so there’s drool on his Armani shirt.

“Close the door when you leave.”

Later, I’m at the airport.

We’re sitting on blue plastic benches in the airport lounge, and Alice is holding a bran muffin and an ice coffee. She’s a friend. A co-worker. Never made a pass at her, but all my friends say I’m crazy. That I should take her home. Sleep with her. I don’t want to break a friendship. A good working relationship. We’re booked on a flight heading to Toronto. We work in Consumer Protection.

In front of me is a man wearing gloves emptying out the trash, and the air-conditioning is jacked way up, so she has goose bumps on her arms.

Alice has always been cocky and distant. A part of me likes that, another part doesn’t. Somehow, I wish she would stop being distant. That she’d like me more. In boy and girl kind of way. You get that way, sometimes. You move closer to her and touch her arm. You look into her eyes. And then you don’t do anything. Her t-shirt says “In The Dirt Is A Shining Spot Of Gold.”

The airport lounge has this bouquet of glue, and she peels the paper off the muffin, and takes a nibble, so I pluck a crumb from her bottom lip.

Departing now. Please show up at the gate.

She’s so close I can see the mole on her cheek. 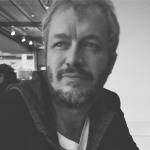 With words, Hugues Dufour hunts the beauty and shame echoing his yearning French-Canadian soul.
His poetry has appeared in Écrits des Forges, his fiction in Nos Courses Autour du Monde, and his screenwriting has adorned the screens of the Cinéma Parallèle, Cinémathèque Québécoise, and the Clermont-Ferrand Film Festival.

He filmed and edited documentaries for the CBC, travelling extensively throughout Africa.

Hugues lives in Montreal with his wife and three children. Visit: huguesdufour.com.